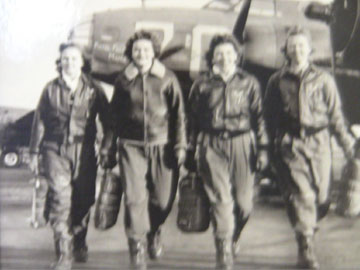 They didn’t have to worry about anti-aircraft fire and enemy planes while flying from Great Falls to Fairbanks, but Lend-Lease pilots were force to do battle with a sometimes violent and unsympathetic enemy in the Yukon and Alaska during winter months – the weather.

Arctic winter weather is a force to be reckoned with. It’s good at catching people unaware and off-guard, and it kills those who underestimate its power – whether they’re veteran mountain climbers, experienced pilots, or grizzled old sourdoughs that were born and raised in the bush.

The ALSIB (Alaska-Siberia) route was successful and fast for its day. Given the long distances, the sub-zero temperatures and the primitive living and working conditions for pilots and ground crews, the losses were relatively small.

Of 8,058 Land-Lease aircraft that were delivered from American factories, 74 were lost in the U.S. Fifty-eight aircraft went down in Canada and Alaska. There were 42 fatal plane crashes in Siberia.

Lend-Lease pilots had to cope with fog; sleet or freezing rain, sudden snow squalls and frozen clouds that coated aircraft wings with ice in seconds. If left unchecked, the weight of the ice would eventually send a plane spiralling down and out of a pilot’s control. There were williwaws (violent gusts of cold wind blowing seaward from a mountainous coast) and hundred-ile-an-hour gales that rocked B-17 Bombers in the air like a child’s paper plane. 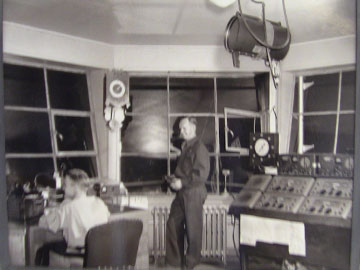 One American pilot – flying blind and guessing his way back to shore in fog over the Aleutian Islands – spotted a duck flying ahead of him in the mist. “I knew that duck wouldn’t fly into a cliff,” he said later, “so I just got behind it and flew formation on it till we got in.”

Many Lend-Lease pilots were less fortunate. They died when their planes went down and crashed into the frozen, uninhabited and unforgiving wilderness. Even more tragic are the stories of those who survived emergency or crash landings – only to die later of hypothermia when temperatures dropped to 50 and 60 degrees below zero Fahrenheit. 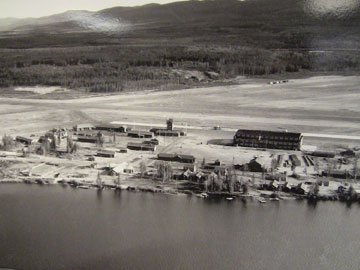 With the constant movement of so many aircraft around the clock, the lack of navigation aids, nasty weather and inexperienced pilots there were many accidents and crashes along the 3,500-mile ALSIB route.

There were communication problems because of a shortage of Russian-English interpreters, and freezing temperatures made routine chores extremely difficult. Mechanics learned that working for five-minutes without gloves would cause them some fingers.

A significant cause of death was pilot disorientation in freak weather conditions, which resulted in mid-air collisions and crashes. At least 140 Soviet airmen died on ALSIB route between Fairbanks and Krasnoyarsk.

Pilots had no heat in the cockpit, other than what a plane’s engines generated. Windshields froze over and instruments often became unreliable. In sub-zero temperatures motor oils turns to molasses, rubber becomes brittle and cracks, and rivets fall out of their holes. In a few short minutes a solid, well-made aircraft could become a rattling and drafty collection of loose parts at 22,000 feet.

Entire squadrons were known to have become separated, or were forced down all along the route in northern Canada and Alaska. 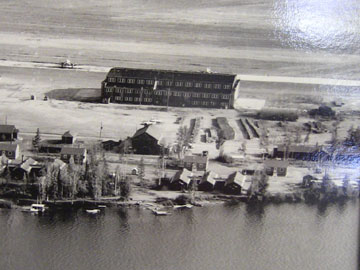 The route originated in 1935 with a Canadian government survey for a Great Circle air route to Asia.

Initially the string of airfields included Grande Prairie, Fort St. John and Fort Nelson in B.C., Watson Lake and Whitehorse in the Yukon Territory. By 1939 landing strips had been built and radio range stations were in operation. Airfields at Big Delta and Northway, Alaska were added later.

Survey crews were still at work when the Second World War broke out in September, 1939. Military strategies on both sides of the border agreed that if the United States entered the war, the value of the airfields would increase dramatically.

In June, 1941, Hitler launched a huge invasion of the USSR, one that threatened to overpower the great Russian empire. Six months later the Japanese Air Force attacked Pearl Harbour and destroyed part of the American Pacific fleet. The U.S. was suddenly at war.

The west coasts of Canada and the U.S. were under threat of japans attack and invasion. Both governments approved the first-ever road to Alaska from the lower 48 states. In 1942 the U.S. Army Corps of Engineers began to carve the Alaska Highway through hundreds of miles of uncharted wilderness. It roughly followed the line of airfields of the Northwest Staging Route. 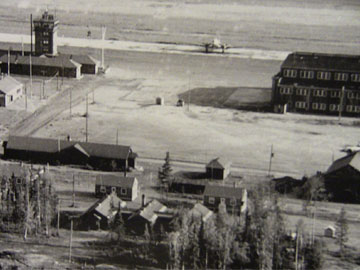 During the Second World War the Soviet Union received a total of nearly 15,000 American-built aircraft under the Lend-Lease Program. More than half of them – 7,926 planes – were ferried ia the Northwest Staging Route. Ships in the North Atlantic delivered the rest, or they were flown across the South Atlantic Ocean to the USSR via North Africa.

Ships crossing the North Atlantic risked attack by German submarines, and the engines of planes flying the African route were often damaged by desert sand. As a result, more aircraft came to be shipped via the ALSIB (Alaska-Siberia) Route.

ALSIB pilots faced equally dangerous risks as winter temperatures on the ground often hovered around 50 degrees below zero Fahrenheit. Planes occasionally went down in remote wilderness areas of the Yukon and Alaska. Some pilots and crewmembers were rescued and some weren’t. 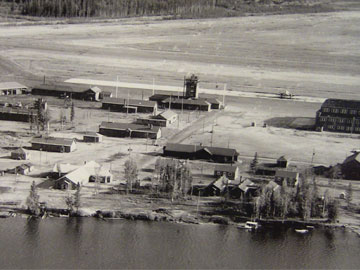 Eleven billion dollars worth of Lend-Lease goods went to aid the Soviet Union in its struggle with Germany on the eastern front. Thanks to American largesse, the Communist nation ended the war in the better economic condition than when it began.

Lend-Lease aircraft from the U.S. eventually made up about 18 percent of all the planes in the Soviet air forces. Some planes actually arrived with price tags: